Please familiarize yourself with the Sprint-Cross rules and the Terms of participiation. The rules ensure a uniform and equal exercise of the sport and cannot be voidable in court.

The organizer reserves the right to make changes to the regulations on short notice. These will be announced at an early stage.

Participants who are not of legal age must show a declaration of approval signed by their legal guardian.

Participation is a personal right. Accordingly, each participant is obliged to collect his / her bib number personally at the race office.

The transfer of the starting place to another person is not permitted.

Participants briefing
At 12.15 p.m., immediately before the qualifying round, the competition management will hold a runners' meeting. Personal participation is mandatory for all participants without exception.

The rules and regulations announced in the course of the competition briefing are mandatory for all participants in addition to the conditions of participation and the Sprint-Cross rules.

Athlete identification
When picking up the registration documents, each participant receives a starter package with competition equipment and starting accessories.

The bib number must be worn clearly visible on the chest.

For the finals, participants will receive a new bib number and a coloured armlet that have to be worn on the right forearm.

Race procedue in the qualification
In the qualification, the entire Sprint- Cross route has to be completed once. The finals are only reached by those participants who qualify as the fastest. These are the top 8 youth and juniors (male and female), the top 16 women and the top 32 men. In the team competition, each team nominates one runner who completes the qualification on behalf of the entire team. Each participant  given a fixed starting time to complete an individual time trial. The participant has to check in the "Holding Area" at least five minutes before the assigned starting time.

Each 30 seconds a start takes place. In the event of overtaking manoeuvres, the slower runner is obliged to give room if possible.

The qualification result counts as the final result for all runners who did not qualify for the finals.

Runners, qualified for the finals, who - for whatever reason - do not compete in the finals, are obligated to report this to the competition management immediately, but not later than 30 minutes before the start of the finals, in order to allow “Lucky losers” participation in the finals.

Timing
The lap-time is measured by electronic timekeeping from opening of the start machine to crossing the finish line (chest = bib number = chip). Timekeeping is handled by means of the organizer's timing system. Own time recording devices are not permitted. The timing chip is integrated in the respective bib number, which has to be worn clearly visible on the chest both during qualification and in all other heats.

Single competition:
Sprint-Cross finals are held in single elimination mode: youth and juniors in a grid of 8, women in a grid of 16 and men in a grid of 32. Four runners compete against each other in one heat at the same time. The two fastest move up to the next round. The last two are eliminated and are  ranked (1st) due to the round reached (e.g. ½ final), (2nd) due to the placement achieved in their last round (3rd or 4th) and (3rd) due to the qualification result in the overall results list. 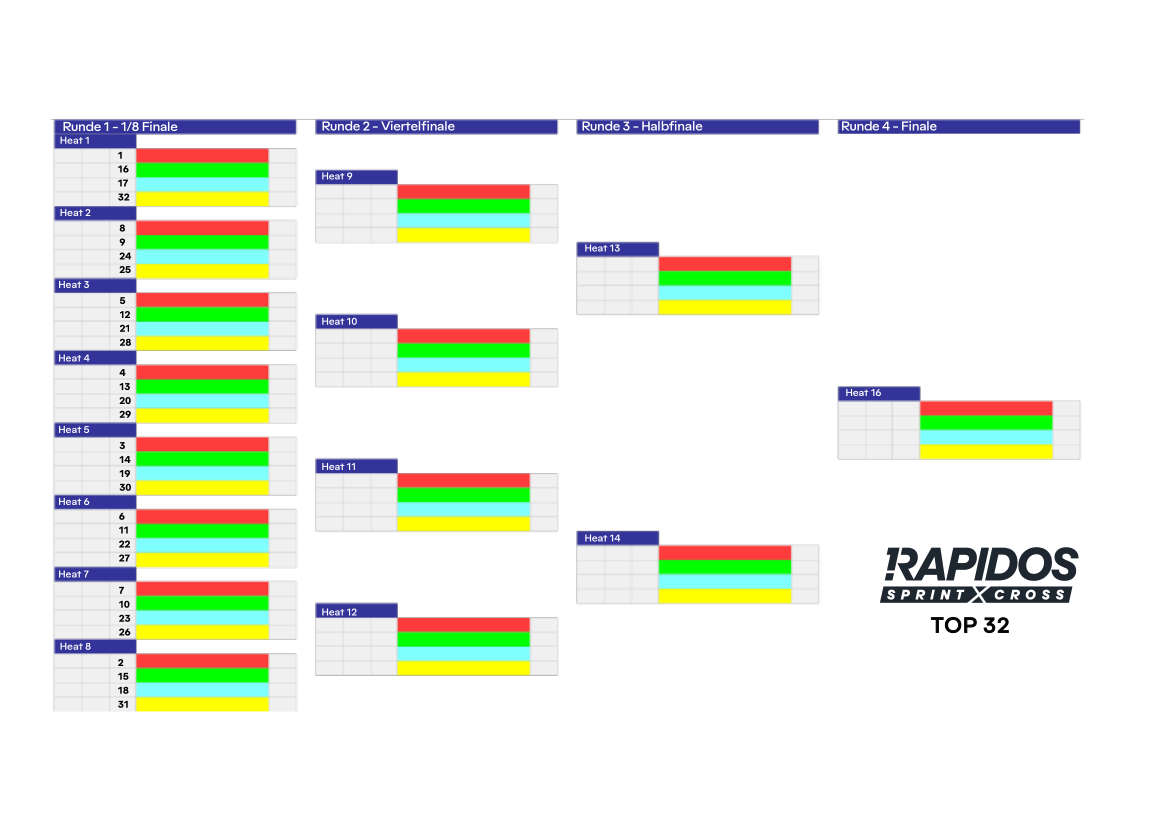 Team competition:
A team consists of three runners regardless of their age group. At least one team member must be female. The team finals are run in single elimination mode in a grid of 16. Two teams with three participants each compete in a team heat. The team that achieves the lower total-ranking-sum is the winner and entitled to proceed to the next round. The total-ranking-sum is calculated by adding up the places of the single team members in this heat (1st, 2nd, 3rd, 4th, 5th, 6th).

In the Sprint-Cross starting machine one starting box is available for each runner. The selection of the starting boxes for the first final round is based on the placement of the qualification (lowest starting number first, second lowest next ...).).

The start command is: “Sprinters ready?” “5 Second Warning”. Within these five seconds the starting machine opens, and the race is released.

Winner of the heat is the runner who crosses the finish line first. The decisive part of the body is the chest (bib number = chip).

Behavior during the competition
The principle of “fairness and fair play” applies throughout the whole event. All participants, supervisors and spectators have to behave in a sporty and respectful manner. Any kind of deliberate hindering (especially pulling on the jersey, aggressive use of the arms against runners, ...), disrespectful behaviour as well as gruffly unsportsmanlike behaviour will be punished without exception with disqualification by the competition management.

Protest
Participants have the right to protest against the heat result. This protest must be submitted to the finish judge or the competition jury within 30 seconds of the announcement of the heat result against payment of a fee of € 20,00. If the protest is rejected, the fee goes to the organizer.

Final result list
The final race result will be announced by the competition management and then published on the website (www.sprint-cross.com).